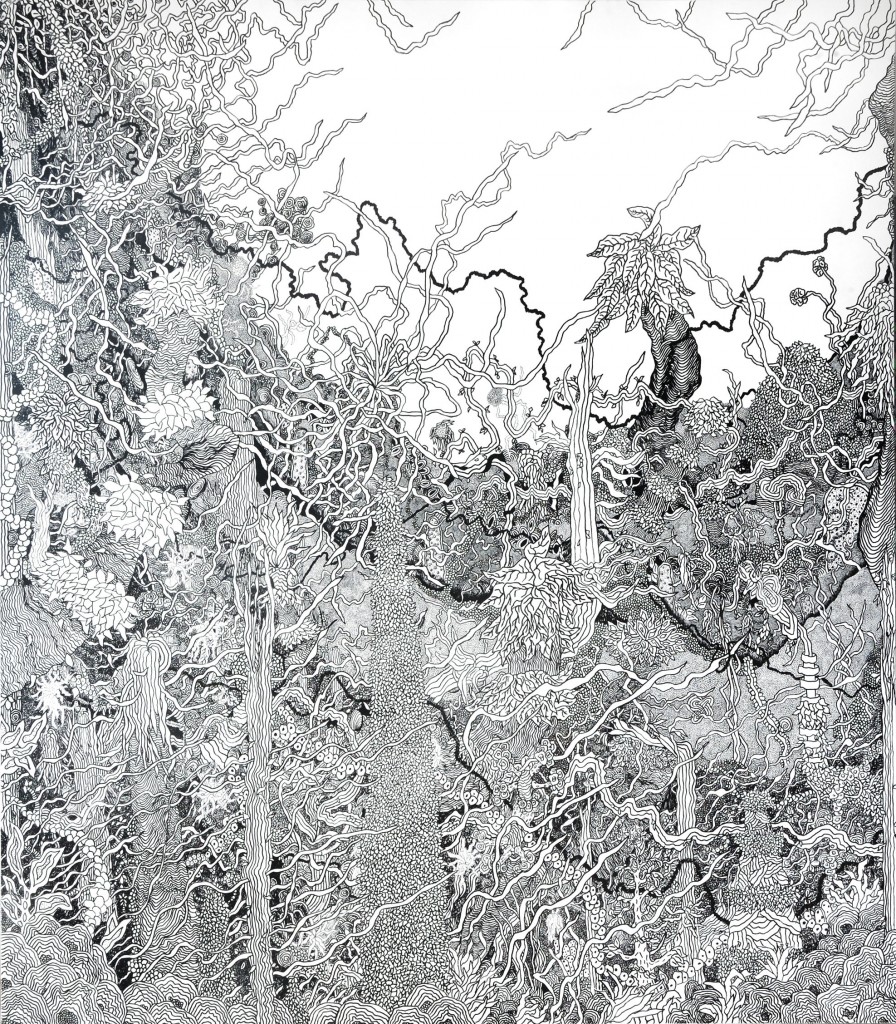 Summary of Exhibition
Carol Brown Goldberg has long been interested in exploring the relationship between art, science and nature. Through the use of wildly expressive lines, saturated colors and repetition, she explores a wide range of themes such as the nature of symbiotic relationships, the evolution of memory, and the contrast between chaos and order.

Goldberg’s artistic process is at once both controlled and free. Taking her cues from automatic drawing developed by the Surrealists, Goldberg’s hand meanders across the canvas. In applying chance and accident to her mark-making process, she allows the unconscious mind to hold great sway. Hence the works she produces may be attributed, in part, to the subconscious and thus reveal something of the psyche, which would otherwise be repressed.

Tangled Nature refers to the artist’s approach the complexity inherent in human relationships as well as the visual appearance of the natural world. Over the course of her career, Goldberg has returned again and again to automatic drawing, this time to produce a series of paintings and drawings that create, what seem like, mysterious complex biological landscapes. These organic, almost extraterrestrial, worlds comprise shapes likened to plants, flowers and microscopic organisms that intertwine together to form strange towering jungles that surround the viewer in an unexplored reality.

Carol Brown Goldberg was born in Baltimore, MD. She moved to the Washington, DC metro area after graduating from the University of Maryland with a B.A. in American Studies. She subsequently pursued her studies at the Corcoran School of Art under Gene Davis, where she was awarded the Eugene M. Weisz award upon graduation. She has taught at American University and the University of Maryland, was Artist-in-Residence at the Chautauqua Institute, and is a recipient of the Maryland State Arts Award.

She has shown in the U.S. and internationally in more than 100 solo and group exhibitions. Her work is included in many museums and private collections, including the New Orleans Museum of Art and the National Museum of Women in the Arts, as well as outdoor sculpture installations at the Kreeger Museum and the Katzen Arts Center at American University